How Does An Air Conditioner Work?

I remember sitting in a meeting one summer as a “high tech professional” from a manufacturer described how an air conditioner works. I can honestly say I was amazed.

Not by the quality of his explanation but by how far this guy was off the mark. He used words like “atomized” and a number of other $10,000 words. None of which described the relatively simple process of air conditioning. By the time he was done I felt...dumber. So how does an air conditioner work?

Take a sponge, squeeze it then dunk it in a bucket of water and release it. The sponge will absorb the water. Remove the sponge from the bucket and squeeze that water out. The bucket has less water in it and the sponge is ready to do it again.

An air conditioner does the same thing except with that magical stuff called refrigerant. Probably better known by the DuPont trade name, Freon.

Refrigerant acts like a sponge in the sense that it absorbs heat from the air passing through your homes ductwork system.

The central air conditioning equipment itself does the work of circulating and removing this refrigerant along with the heat it absorbs from inside your living space and “squeezing” the heat to the outdoors.

Once the heat is removed from the refrigerant this cycle is repeated until the home is cooled to the set temperature.

On the inside of the home, as the air is cooled, moisture is removed thus dehumidifying the air as well.

The blower is simply a motor attached to a blower wheel that is designed to push air through the evaporator and ductwork. It is often just a part of the furnace.

The evaporator is a group of copper or aluminum tubes coiled back and forth with aluminum fins or plates across them. It is normally installed inside the ductwork of your home. The refrigerant is pumped from the air conditioner into the evaporator as a liquid.

As it changes from a liquid to a gas it absorbs heat. Seventy-five degree air goes in (return air), 55 degree air comes out (supply air) and the ductwork system distributes the cooled air throughout the home.(The temperature of the air coming in and out will vary but a 20 degree temperature difference from the return air and the supply air is a good rule of thumb.)

The refrigerant is now a gas and contains a great deal of heat that we need to remove. This is where the compressor and condenser on the outside of the home do their job.

The compressor is the heart of the air conditioner and is a black or orange “can” usually located in the center of the unit. The refrigerant is drawn into the compressor by its pumping action and compressed.

It is still a gas and still has all the heat it absorbed but now in its compressed state is called a hot gas. The hot gas is then pumped through the condenser.

The condenser is the other part of the outdoor unit and is very similar to the evaporator but larger. It is a group of copper or aluminum tubes coiled all around the air conditioner with aluminum fins or spines across them.

Air is pulled across the condenser by the condenser motor and cools the hot gas with outside air. This would be where we could say we are “squeezing” the heat back out.

Put your hand over the warm air coming out of the top of your air conditioner and you will feel this process. This is the heat being removed from the refrigerant.

Once the heat is removed the refrigerant changes state back into a liquid and the process is ready to start again.

Whether you use a standalone fan, a whole house fan or an air conditioner to stay cool, the process of evaporation does all the work. 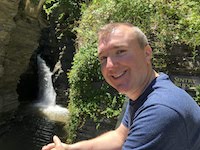